Written by Camilla Scarlett on 27th September 2017. Posted in News.

La Serenissima celebrated its prestigious win at the 40th Anniversary Gramophone Awards ceremony in London on 13th September with representatives from Avie Records and associated distributors. In a ceremony which showcased two wins from our Italian colleagues Il Giardino Armonico and a notable award to the iconic Dame Kiri Te Kanawa, Adrian Chandler was proud to accept the award for Baroque Instrumental on behalf of La Serenissima and all the musicians performing on The Italian Job. Gramophone Editor James Jolly and violinist Jennifer Pike presided over a ceremony in which atleast one British Maestro had to force his way through the chaos of tightly-packed diners; Adrian was presented with his award back-to-front which caused some problems for the awaiting photographer! The edited version of the presentation can be viewed here 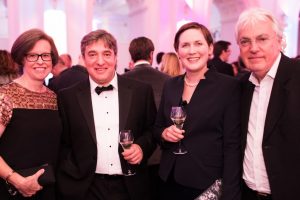