Reviews for promotional use

‘…collectively the performances may make up the best album of 2017’

The English, historical-instrument, Baroque ensemble La Serenissima (the term was a nickname for the city of Venice) has specialized in somewhat scholarly recordings that nevertheless retain considerable general appeal, and the group does it again with this release. The program offers some lesser-known composers, and some lesser-known pieces by famous composers like the tiny and fascinating Concerto alla rustica for two oboes, bassoon, strings, and continuo, RV 151. What ties the program together formally is that it covers a range of Italian cities that were becoming cultural centers as they declined in political power: not only Venice (Vivaldi, Albinoni, Caldara), but also Padua (Tartini), Bologna (Torelli), and Rome (Corelli). There are several works by composers known only for one or two big hits, and these are especially rewarding. Sample the opening movement of Tartini’s Violin Concerto E major, DS 51, with its unusual phrase construction and daringly chromatic cadenza passage: it has the exotic quality for which Tartini became famous, but it does not rely on sheer virtuosity. That work is played by leader Adrian Chandler himself, but he also chooses pieces for a large variety of other solo instruments: the Italian Baroque was about more than the violin. Each work on the album has something to recommend it, and collectively the performances may make up the best album of 2017 whose booklet includes footnotes.

‘The soloists and ensemble are superb and Adrian Chandler is very effective both as leader and soloist in the Tartini concerto. …they play with precision and passion, both readily evident on this new release.’

‘The ensemble plays comfortably, and Chandler never leads them on any..’

‘The ensemble plays comfortably, and Chandler never leads them on any helter-skelter barnstorming. That is, the tempos are lively but never rushed.’

…’all their typical hallmarks: a fresh, zinging tone alive with vitality and enjoyment…’

‘My heart skipped a beat when this new offering from La Serenissima and Adrian Chandler landed on my desk, such was my enjoyment of their Gramophone Awards-shortlisted Vivaldi Four Seasons recording (10/15). So to discover that with this all-Italian assortment of sinfonias and concertos they’ve actually topped their 2016 triumph – and apparently effortlessly – gives me no small amount of pleasure.

La Serenissima have a glorious and all-too-rare ability to make one’s pulse race afresh with every new project, and ‘The Italian Job’ has all their typical hallmarks: a fresh, zinging tone alive with vitality and enjoyment, an effortless easy panache from both ensemble and soloists, and the whole underpinned by a scholarly attitude to programming and performance style which is yet worn with light grace.

They also throw the recording critic a problem, because when faced with such a consistently excellent, colouristically and stylistically contrasting programme whose differences absolutely sing together as a unit, then to draw readers’ attentions to ‘highlights’ feels thoroughly unhelpful. However, I will say that Chandler’s violin solos in the Tartini Concerto for violin, strings and continuo are ones of a singing sweetness and ease that leave you wishing it wouldn’t end. Also, that never has an Albinoni oboe concerto held me in such rapt delight as this double concerto did with soloists Gail Hennessy and Rachel Chaplin.

Finally, that while with recordings I’m usually focused only on the finished package in my hands, with Torelli’s Sinfonia in C I couldn’t help but dream of what an extraordinary listening experience it must have been at the recording session, at St John’s Smith Square – both in the lavishly ringing tuttis (this sinfonia has a monster-sized solo line-up of four trumpets, timpani and two each of oboes, bassoons, violins and cellos) and in the sudden drops down to unexpectedly intimate string forces.

In short, were I asked to condense this review down to two simple words, they would be: buy it.’

‘…an avant-garde approach that would have awed Hendrix’

It might come as a surprise to learn that the third largest collection of Vivaldi manuscripts belongs to Manchester. How these priceless scores came to reside in the city’s Henry Watson Music Library is a fascinatingly convoluted tale involving the acquisition by Charles Jennens, the librettist of Handel’s Messiah, of manuscripts purchased – by weight – from a bankrupted Italian cardinal.

It wasn’t until the 1970s that this stack was discovered, by Michael Talbot, to contain 12 previously unknown violin sonatas and the only fair copy of The Four Seasons bearing the evidence of supervision in Vivaldi’s own hand. Appropriately, it was the Manchester Four Seasons that Adrian Chandler’s ensemble La Serenissma elected to play with the part-books proudly on display in the foyer.

In truth, the differences between the Manchester Seasons and the more familiar one exist at the scholarly level of the articulation of slurs and certain antiphonal effects. But the main Mancunian revelation was the less prescriptive approach these parts took to the figured bass, enabling the violas to become pleasingly present in the resulting transparency of texture.

Among the more obscure items in the Manchester stash is a pair of concertos written for a defunct version of the violin known as a “violin in tromba marina”. Little is known about them other than that they mimicked the original, one-stringed instrument (tromba marina), probably had three strings, were very loud and featured metal components intended to rasp like a trumpet. Chandler’s conjectural reconstruction is the only playable example in the world, and raised the question: why might you take a perfectly good fiddle, remove one of the strings and make it buzz? The answer supplied by these dark, abrasive concertos seemed to lie in Vivaldi’s avant-garde approach to tone colour; exploring the sonic combination of virtuosity, volume and distortion 250 years before Jimi Hendrix.

‘…If the sheer sweep and vivacity captivates, details are just as telling.’

‘La Serenissima’s fresh approach grows out of The Four Seasons itself.

Listeners that usually find the ritornello that launches Autumn a touch twee will be diverted by the energising thrum of the guitar… If the sheer sweep and vivacity captivates, details are just as telling.

The appoggiatura Chandler applies to the end of his first solo entry in Winter plumbs the chill of the grave, and in the perky Largo he delivers an object lesson in how to decorate the music meaningfully. Two concertos showcasing Peter Whelan’s playfully agile bassoon are paired with two rare concertos for a specially constructed three-string ‘violino in tromba marina’ lending a touch of raucous exoticism.’

Our Heading font can be downloaded Here

Our Body font can be downloaded Here

La Serenissima is recognised as the UK’s leading exponent of the music of eighteenth-century Venice and connected composers. Uniquely, the group’s entire repertoire is edited from source material, and it has been praised for its ‘glorious and all-too-rare ability to make one’s pulse race afresh with every new project’ (Gramophone). La Serenissima has become synonymous with virtuosity, dynamism and accessibility, uncovering a plethora of new repertoire and making it available to all through live performance, high calibre recording work, education and outreach initiatives.

Since the first album was released in 2003, La Serenissima’s recordings have been applauded by numerous publications and have attracted multiple awards, besides being chosen to feature in international advertising (Versace, 2018) and film (Portrait of a Lady on Fire, 2020). In 2010, The French Connection won the Gramophone Award for ‘Baroque Instrumental’. The Four Seasons was released in 2015, spending several weeks in the UK Specialist Classical Chart and being selected as Editor’s Choice (Gramophone) and Concerto Choice (BBC Music Magazine). In 2017, The Italian Job won a further Gramophone Award. The ensemble’s album Vivaldi x2 topped the UK Classical Chart upon release in 2018, with The Sunday Times writing that ‘under Adrian Chandler, the playing, vibrant yet polished to perfection, is superb.’ Most recently, La Serenissima’s album Extra Time has received exhaustive radio play from all major UK radio stations and clocked up over 250,000 streams in the first 2 weeks of release, with Gramophone remarking that ‘the music-making is top-drawer and joyous’.

La Serenissima has performed throughout the UK and internationally in both urban and rural venues: many projects have reached new audiences through project funding from Arts Council England. In 2018 it gave the first modern performance of Brescianello’s opera Tisbe for the Buxton Festival. In 2019 La Serenissima opened the London Festival of Baroque music, debuted at the Snape Proms and gave the modern premiere of Caldara’s opera Lucio Papirio Dittatore in Buxton; they also launched a new animateur-led outreach programme for key-stage 2 children as part of The Godfather tour. The Covid-19 pandemic caused landmark disruption to La Serenissima’s 2020/21 Season with the cancellation or postponement of concerts in Beverley, Bury St Edmunds, Buxton, Chipping Campden, Edinburgh, Oxford, Richmond (Yorkshire), Saffron Walden, Southampton and Venice, as well as the delay to its Wigmore Hall residency.

La Serenissima was awarded an Emergency grant in April 2020 by Arts Council England to enable the organisation to remain operational for the 6 months following the start of the UK’s lockdown. During this unprecedented chapter, Adrian Chandler launched his ‘daily Vivaldi violin concerto edit’ which was shared via social media channels over the period of closure, inspiring lively interaction from fans, musicians, scholars and other Vivaldi enthusiasts from across the globe. The results from the project will form a future publication on Vivaldi’s violin method.

La Serenissima is proud to have as its Honorary Patron, His Excellency The Italian Ambassador to the UK.

‘They really put the rock into baroque!’ Classic FM 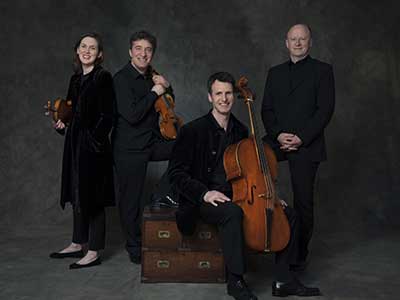 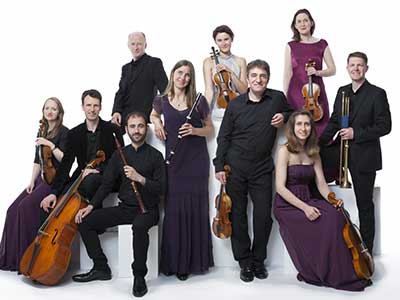 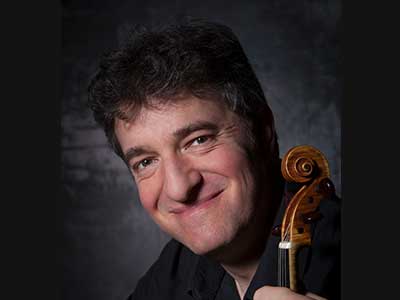 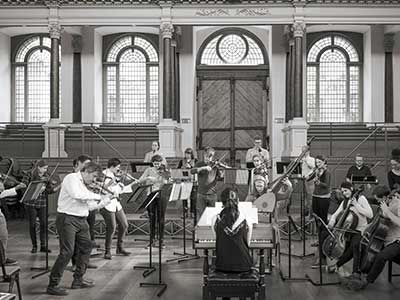 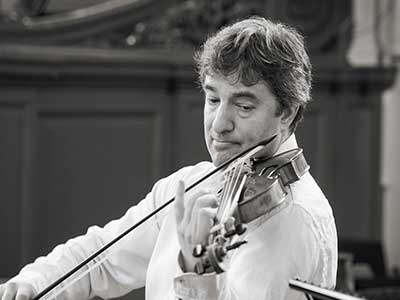 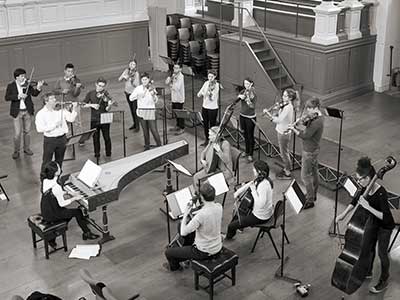