Our management team grows to 3

Written by Camilla Scarlett on 15th January 2018. Posted in News.

We are delighted to announce the addition of Emma Wilkinson to the La Serenissima family. Emma has begun this month in a new role of Operations Manager for the orchestra; her responsibilities include developing UK and foreign touring plans, with special focus on our 25th Anniversary Season during 2018/19. She brings with her enormous experience and widely-acknowledged expertise in the field, having worked for 27 years as Orchestral Manager for the European Union Baroque Orchestra, prior to its departure from the UK (post-Brexit vote). Her arrival is hugely significant as it is the first time in our history that there will have been sustained support from an experienced professional from outside the musicians of the group. She joins Artistic Director Adrian Chandler and General Manager Camilla Scarlett in the charity’s new office in Oxfordshire. Partial funding for the role has been generously provided by The Foyle Foundation and an anonymous donor; we are working to raise sufficient funds to secure the role in full. To help support this vital innovation, please contact General Manager Camilla Scarlett. 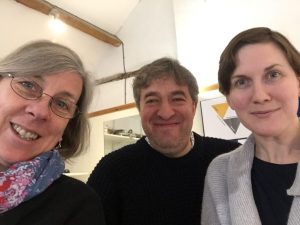