Putting the rock in baroque: Vivaldi x2 makes No. 1

Written by Camilla Scarlett on 6th August 2018. Posted in News.

New release Vivaldi x2 hit the market on 20 July and entered the UK Specialist Classical Chart at No. 1. This extraordinary achievement reflects growing interest driven by a recent successful crowdfunding campaign and developing followers through recent flagship programmes The Four Seasons and Gramophone Award winner The Italian Job. The new record has been widely featured on BBC Radio 3 programmes Essential Classics, In Tune and Record Review and was celebrated on Classic FM as John Suchet’s ‘Disc of the Week’ with the immortal observation that La Serenissima ‘really put the rock into baroque’. The Telegraph critic Ivan Hewitt continued the theme by saying that listening to Vivaldi x2 prompted him to realise that ‘It was Vivaldi, not Louis Armstrong or Hendrix, who invented the riff’. We couldn’t agree more! 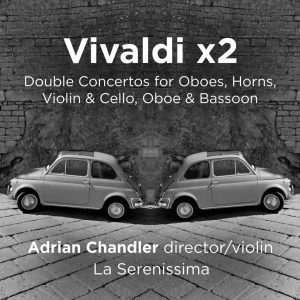