Written by Camilla Scarlett on 1st September 2017. Posted in News.

We are thrilled to share the news that The Italian Job was announced as winner in the Baroque Instrumental category of the 2017 Gramophone Awards. The project was on a hugely ambitious scale and La Serenissima are immensely grateful to everyone who has supported the group during the 2016/17 season, and especially those who specifically donated to The Italian Job appeal. Artistic Director Adrian Chandler will be accepting the award on 13 September at the 40th anniversary ceremony in London. 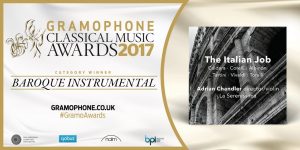